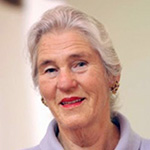 Janet D. Rowley, MD (1925-2013), was among the first scientists to identify that a chromosomal translocation is the cause of certain types of leukemia and other cancers. She was awarded the Presidential Medal of Freedom in 2009 and the 2012 Japan Prize for her work in developing imatinib (Gleevec), a widely used targeted therapy that was first approved in May 2001 for treating chronic myeloid leukemia.