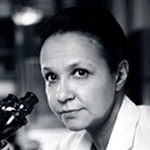 Jane Cooke Wright, MD (1919-2013), became director of the Cancer Research Center at Harlem Hospital in New York City in 1952. She was appointed to the President’s Commission on Heart Disease, Cancer and Stroke in 1964 and served as a member of the AACR Board of Directors 1971-1974. The AACR Minorities in Cancer Research Jane Cooke Wright Lectureship was established in her honor in 2006.