What do Drs. Emmanuelle Charpentier, Jennifer A. Doudna, William G. Kaelin Jr., Sir Peter J. Ratcliffe, Gregg L. Semenza, James P. Allison, and Tasuku Honjo have in common? For one thing, they have all been named Nobel laureates in the past three years. But every one of these accomplished scientists is also a Fellow of the American Association for Cancer Research (AACR) Academy.

The AACR Academy was established in 2013 to recognize and honor accomplished scientists who have made major contributions to cancer research. Currently, there are 256 Fellows of the AACR Academy from all over the world. Remarkably, 55 of them have been awarded a Nobel Prize in a scientific field. 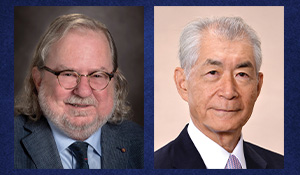 On Oct. 1, 2018, Dr. Allison, of the University of Texas MD Anderson Cancer Center in Houston, was attending the Fourth CRI-CIMT-EATI-AACR International Cancer Immunotherapy Conference in New York City when he found out he had won the 2018 Nobel Prize in Physiology or Medicine, along with Dr. Honjo, of the Kyoto University Institute for Advanced Study and Kyoto University in Japan.

Drs. Allison and Honjo were awarded the prize for their pioneering work on regulating the immune system so it can better attack tumor cells, research that led to regulatory approvals and widespread usage of immunotherapy antibodies to treat a spectrum of cancer types. These drugs, also called immune checkpoint inhibitors, have provided long-term remission to late-stage cancer patients.

Dr. Allison’s research uncovered some of the basic biology of T cells, including CTLA-4 (cytotoxic T-lymphocyte-associated protein 4), a T-cell receptor that functions as an immune checkpoint, putting the brakes on the immune system. Some cancers take advantage of this signaling to curb T-cell activity for their own growth advantage. Dr. Allison and his colleagues developed an antibody that blocks CTLA-4 on T cells, releasing the brakes and allowing activated T cells to attack and kill tumor cells. He demonstrated that the anti-CTLA-4 antibody could inhibit tumor progression and growth in animal models, which later led to clinical trials and the U.S. Food and Drug Administration’s regulatory approval of the first immune checkpoint inhibitor, ipilimumab (Yervoy), for metastatic melanoma, in 2011.

Dr. Honjo discovered another T-cell immune checkpoint, called the programmed cell death protein 1 (PD-1), that likewise puts the brakes on the immune system. Immune checkpoint antibodies against PD-1 represent some of the most successful immune therapies for treating cancer, including nivolumab (Opdivo) and pembrolizumab (Keytruda). 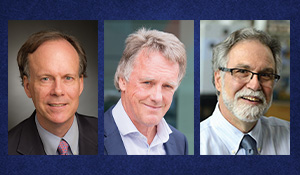 Together, research from the laboratories of these three esteemed researchers uncovered the mechanisms of how cells sense and adapt to changing oxygen levels. Their work is helping scientists better understand how organisms adapt to low oxygen levels, such as those recorded at high altitudes, and how cancer cells are able to thrive in low-oxygen conditions.

Dr. Semenza, of the Johns Hopkins University School of Medicine in Baltimore, was working on the erythropoietin gene, EPO, which controls red blood cell production and oxygen delivery. As part of his research, he identified an interacting protein, now called hypoxia-inducible factor 1 (HIF-1), a master regulator that controls how cells respond to reduced oxygen levels, called hypoxia. The production of new blood vessels and evasion of the immune system are among the processes that HIF-1 controls when cells are starved of oxygen. Cancer cells are often hypoxic, and these processes help cancers become aggressive and metastasize.

Dr. Kaelin, an investigator at the Dana Farber Cancer Institute in Boston, and Dr. Ratcliffe of Oxford University in the United Kingdom, meanwhile, were both studying the VHL gene. When this gene is mutated, it can lead to von Hippel-Lindau (VHL) disease, a rare genetic disorder associated with an elevated risk of tumors in the kidney and other parts of the body. They each suspected that the VHL gene was linked to oxygen regulation, because VHL disease tumors produce hormones normally found when physiological oxygen levels are low. Dr. Ratcliffe found that VHL helps regulate HIF-1 by binding and processing the protein for degradation when oxygen levels are sufficient but not under low oxygen conditions. Dr. Ratcliffe and Dr. Kaelin independently found that under sufficient oxygen conditions, hydroxyl groups are added to HIF-1, which allows VHL to bind to and degrade HIF-1.

Scientists are currently using the knowledge gained by this research to target the oxygen-sensing machinery in hypoxic tumors, but also to possibly prevent and treat heart attacks, strokes, and anemia. 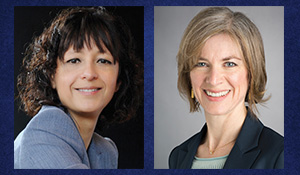 The 2020 Nobel Prize in Chemistry marked the first time a group of researchers comprising only women was awarded a science Nobel. Emmanuelle Charpentier, PhD, of the Max Planck Unit for the Science of Pathogens in Berlin and Jennifer A. Doudna, PhD, of the University of California, Berkeley, developed a now ubiquitous form of precise genomic editing called CRISPR-Cas9, based on an ancient bacterial “immune system.”

Both scientists were working separately to understand this bacterial immune system. Bacterial geneticists had already found that bacterial genomes contained repeating nucleotide sequences interspersed with short sequences from viruses called CRISPR (clustered regularly interspaced short palindromic repeats), and suspected that this was a form of immune memory for the organisms to remember previously encountered viruses. Dr. Charpentier then identified the small, specific RNA molecules that associated with CRISPR and that interacted with the Cas9 protein that could cut DNA. In 2011, she and her colleagues showed that bacterial cells have a three-component complex consisting of transcribed CRISPR RNA, another RNA called tracrRNA, and Cas9 that likely allowed the bacterial cell to prevent invasion by a virus. Dr. Doudna had also been fascinated by CRISPR and was working on what the components were and how bacterial cells used them.

The two met at a conference and decided to collaborate. In 2012, they showed that the viral sequence stored within CRISPR goes on to form an RNA molecule that associates with the tracrRNA and Cas9, which then cuts up any complementary viral DNA in the cell that it encounters. Most importantly, they successfully carried out their vision, demonstrating that the CRISPR system could be simplified and manipulated in the lab. They re-created the genetic scissors in a test tube so that they could target a DNA sequence of their choice. The CRISPR system is now being used to develop new medicines, including cancer therapies.

A Global Brain Trust: The Fellows of the AACR Academy