AACR Notes the 50th Anniversary of the National Cancer Act

In 1970, there were a small number of effective cancer treatments and a limited knowledge of cancer biology and prevention strategies. Researchers, clinicians, cancer survivors, and patients had advocated for years for a focused commitment to make progress against cancer.

Their efforts were rewarded on December 23, 1971, when President Richard M. Nixon signed into law the National Cancer Act of 1971. The legislation represented a renewed commitment by the federal government to invest in cancer-focused research that would ultimately contribute to driving down the rates of cancer diagnoses and improving cancer patient outcomes.

This year marks the 50th anniversary of the National Cancer Act of 1971 and an expanded role for the National Cancer Institute (NCI), the federal government’s primary agency to address research and training needs for the cause, diagnosis, and treatment of cancer. The AACR has been a steadfast partner and collaborator with the NCI through the decades, with many AACR members serving prominent roles in the NCI, including the current NCI director, Norman E. “Ned” Sharpless, MD.

The anniversary was showcased in the AACR Cancer Progress Report 2021 released in October. “A lot of positive momentum in laboratory and clinical research, as well as therapy advances have happened since the landmark legislation was signed in 1971,” said Rajarshi Sengupta, PhD, a senior editor and scientific adviser at the AACR who oversees the annual AACR Cancer Progress Report. “This year’s report includes a timeline of some of the most important clinical advances in oncology over the last 50 years.”

Although not all the basic, clinical, translational, and population health sciences advances in cancer since 1971 can be directly linked to the enactment of the National Cancer Act, the focus on cancer research funding and infrastructure contributed to improvements in prevention, detection, diagnosis, and treatment of cancer and to cancer survivorship.

50th Anniversary in the Pages of Cancer Research

In 1971, the AACR published just one journal, Cancer Research, for original scientific, peer-reviewed research. (The AACR now publishes 10 journals.) This year, Cancer Research is noting the 50th anniversary of the National Cancer Act by publishing commentaries written by leading scientists on seminal research papers that have appeared in the journal over the past five decades.

“We have identified the truly landmark publications in our journal and are celebrating them with written commentaries by cancer researchers. This is our way to applaud the landmark National Cancer Act of 1971,” said Chi Van Dang, MD, PhD, editor-in-chief of Cancer Research. Dr. Dang is the scientific director of Ludwig Cancer Research and a professor in the Molecular and Cellular Oncogenesis Program at the Wistar Institute Cancer Center in Philadelphia.

Some of the original studies discussed in commentaries include:

Kornelia Polyak, MD, PhD, a professor of medicine at Harvard Medical School and the Dana Farber Cancer Institute in Boston, penned a commentary on a paper published in 1990 by Samuel L. Brooks, PhD, and colleagues that described the isolation and characterization of MCF10, a spontaneously immortalized human breast epithelial cell line—work that has directly affected her own research.

“Our lab often uses this cell line, and many labs use the MCF10 as a control for how cancer cells behave, and for mechanistic and breast cancer progression studies in xenograft models when derivatives of this cell line are injected into mice,” said Dr. Polyak. “One of these derivatives, MCF10DCIS, is a unique cell line because it serves as one of the rare models for ductal carcinoma in situ (DCIS), a pre- or noninvasive breast cancer.”

According to Dr. Dang, NCI-funded research has led to the discovery of oncogenes in human cancers and has facilitated the development of cancer therapies, including imatinib (Gleevec) for treating acute lymphoblastic leukemia and subsequent tyrosine kinase inhibitors that have been approved by the Food and Drug Administration. “These agents came about as a result of research in the 1970s and 1980s on the tyrosine kinase pathways and how they contribute to cancer,” said Dr. Dang. “What followed are the discovery of immune checkpoints that led to immune therapies such as nivolumab [Opdivo] and pembrolizumab [Keytruda] that have improved cancer patient survival. The NCI itself has also supported and conducted engineered T-cell studies, which has led to immune cellular therapies for cancer patients and has transformed the treatment of certain types of cancers.”

Reflecting on the past 50 years, Dr. Dang is also looking to the future. “We need to continue supporting out-of-the-box ideas to make progress and solve major issues in cancer, including cancer resistance, but also to develop better ways to prevent cancer disparities and protect the most vulnerable in our population, to nationalize data sharing, and to exploit the computational power of other sciences and industry to help patients quicker,” Dr. Dang said. “Cancer Research is among the oldest cancer research journals, and I hope that it continues to thrive, as cancer research does.”

Said Harmony Turk, PhD, the executive editor of Cancer Research, “The National Cancer Act made basic research and data sharing a priority. These continue to be the cornerstones of our progress in cancer.”

The FIFTY for FIFTY Campaign 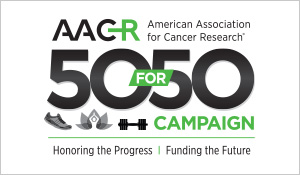 The AACR Foundation has launched FIFTY for FIFTY, an awareness and fundraising campaign to commemorate the 50th anniversary of the National Cancer Act. The goal is to raise at least $50,000 to fund lifesaving cancer research to continue the progress against cancer.

“While tremendous progress has been made since the signing of the National Cancer Act, the more than 200 diseases we call cancer continue to pose enormous public health challenges,” said Mitch Stoller, chief philanthropic officer and vice president of development of the AACR Foundation. “The funds raised as part of the FIFTY for FIFTY initiative are critical in continuing the momentum in cancer research to find breakthroughs that will extend and improve lives.”

Since the campaign launched in July, various fundraising events and opportunities for donors and supporters have occurred. In September, the AACR Foundation held STRIDES, which challenged participants to raise funds and walk or run 50 miles during the month as part of a team or on their own. Following STRIDES, C.A.L.M, a wellness series, was held each Wednesday in October. This included virtual yoga and meditation sessions suitable for all skill levels and led by instructors from OMM Yoga Studio, a Philadelphia-based studio.

To raise awareness of progress in cancer research, the campaign included weekly social media posts using the hashtag #AACR50for50. The posts included stories from various people impacted by cancer and facts focused on research milestones from the past half century.

To learn more about the FIFTY for FIFTY campaign, please visit AACR.org/FiftyforFifty.

A Half-Century of Progress

The successes in cancer research and treatment have been dramatic in the past half century. In the mid-1970s, the five-year relative survival rate for individuals with any type of cancer was 49%. That rate increased to 68% for those in the U.S. diagnosed between 2011 and 2017. Among children and teens, survival has improved from a 63% five-year relative survival in the mid-1970s to 84% between 2011 and 2017.

The original National Cancer Act was passed in 1937 to provide funding specifically for cancer research, the first time the U.S. Congress had allocated funds to address a noncommunicable disease. The 1937 law, signed by President Franklin D. Roosevelt, established the National Cancer Institute (NCI). The Public Health Service Act of 1944 made the NCI an operating division of the National Institutes of Health (NIH).

The 1971 act intensified and expanded the NCI’s role and reach, establishing the current structure of the agency and significantly expanding the role of the NCI’s director. The president would directly appoint the director, who had the authority to submit an annual NCI budget to the president without oversight by the NIH. The law mandated that a group of cancer experts, called the National Cancer Advisory Board, would advise and assist the NCI in carrying out its programs. The President’s Cancer Panel, a three-member group that submits an annual report to the president on special topics in cancer research, was also created. 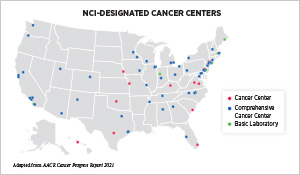 The National Cancer Act also established the NCI Cancer Centers Program to support the leading cancer-focused institutions across the U.S. This program is considered one of the anchors of the country’s cancer research effort, recognizing those cancer centers that combine rigorous clinical and laboratory research with high-quality patient care, including diagnosis, prevention, and treatment. These institutions serve as cancer care hubs, conducting clinical trials on novel therapies, leading laboratory-based research, and collaborating with the health care industry and the community, including local, smaller clinical cancer centers as well as cancer patient advocacy groups.

The legislation also provided funding to establish 15 cancer research centers and local cancer control programs. Today, there are 71 NCI-designated cancer centers across 36 states and the District of Columbia.

NCI-designated cancer centers serve as major points of care for cancer patients and offer community-based cancer screening and public education in collaboration with local clinics. Importantly, the country’s network of NCI-designated cancer centers also serves as a vital training ground for the next generation of cancer clinicians and researchers, providing fellowships, research opportunities, mentorship, and other educational programs.

Thanks to the 1971 law, the NCI also established in 1973 a concerted effort to collect and analyze U.S. cancer incidence, survivorship, and mortality data—the Surveillance, Epidemiology, and End Results (SEER) program.

These efforts have helped to decrease the overall age-adjusted cancer death rates in the U.S. by 31% from 1991 to 2018, which represents approximately 3.2 million cancer deaths avoided. This decline in the cancer death rate has been driven largely by the major reductions seen among individuals diagnosed with lung cancer and melanoma.