The American Association for Cancer Research (AACR) is committed to increasing diversity in the field of cancer research and reducing cancer health disparities experienced by racial and ethnic minorities and other underserved populations. These efforts coalesced more than 25 years ago when a committee was established to coordinate AACR efforts in support of minority cancer researchers. In 2000, the AACR Board of Trustees established the AACR Minorities in Cancer Research (MICR) Council.

This year, the AACR celebrates the 20th anniversary of MICR, which has more than 5,000 members and is widely recognized as an important contributor to the AACR’s research and policy agendas. MICR members develop programs designed to increase the visibility and recognition of minority scientists within the AACR as well as to address their professional needs. The MICR Council works closely with members of the AACR Science Policy and Government Affairs Committee to influence policies and legislation aimed at reducing disparities in cancer incidence and mortality and improving cancer care for minorities and the medically underserved. 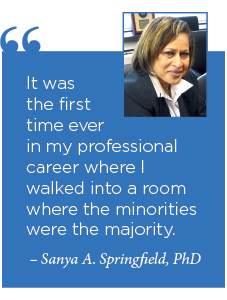 Sanya A. Springfield, PhD, director of the National Cancer Institute (NCI) Center to Reduce Cancer Health Disparities, was a member of the committee that became the MICR Council in 2000. She clearly recalls the first reception the committee held at an AACR meeting. “It was the first time ever in my professional career where I walked into a room where the minorities were the majority,” said Dr. Springfield, the third African American neuroscientist in the world. “That was overwhelming for me. I also saw people whom I had been funding through the NCI but had never met. It was clear to me that I wanted to be here forever.”

For the AACR, marking the 20th anniversary of MICR offers an opportunity to celebrate the researchers who envisioned the group’s potential and set it on its course. “I think we underestimate often the work that the council has done and the many, many pioneers and members who participated through the years,” said Dr. Springfield. “Our work has not been incremental. We’ve made huge progress. The initial goal was to expose underrepresented minorities to the AACR Annual Meeting. The next step was to have those individuals who were exposed to become competitive cancer researchers and to contribute to the field. Then we learned that disparities can have a biological or genetic undertone, and the Council expanded to address this issue of cancer health disparities.”

Since the inception of MICR, the proportion of minority group members in the AACR has increased from less than 2 percent of membership to about 11 percent. 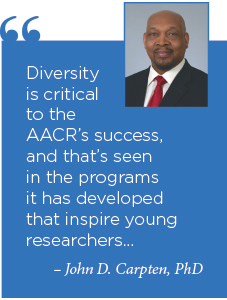 In September 2020, the MICR membership group and the AACR at large released a strongly worded call to action to eliminate racism and racial inequities in cancer research and health care. Among the recommendations are adopting policies that guarantee equal access to quality health care; mounting educational efforts to address and eradicate racism; fostering programs to bring career opportunities in health-related fields to underrepresented, low-income youth; addressing racism as a public health crisis like tobacco use or obesity; and standing up for social justice and supporting the demands of victims of racial injustice.

John D. Carpten, PhD, the director of the Institute for Translational Genomics at the Keck School of Medicine at the University of Southern California in Los Angeles, assumed the role of chair of the 13-member MICR Council for 2020-2021. Dr. Carpten was among the first scientists to investigate the relationship between biology and cancer disparities, and his findings contributed to MICR’s decision to broaden its mission to that area. In 2019, he became the first African American to chair the Program Committee for an AACR Annual Meeting.

“Diversity is known to be an important factor in improving any organization,” said Dr. Carpten. “You bring to bear different perspectives and different ideas toward a given problem and it helps to identify more, and in many cases innovative, solutions. Diversity is critical to the AACR’s success, and that’s seen in the programs it has developed that inspire young researchers, because they see that there is a place for people like them and that they can pursue this career.” 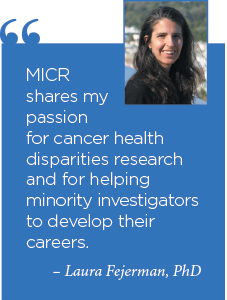 Laura Fejerman, PhD, an associate professor in the Department of Public Health Sciences and the UC Davis Comprehensive Cancer Center at the University of California, Davis, chaired the MICR Council in 2019-2020. As MICR Council chair, Dr. Fejerman helped influence and grow AACR programs designed to benefit minority group researchers. This included chairing the 12th AACR Conference on The Science of Cancer Health Disparities in Racial/Ethnic Minorities and the Medically Underserved, held in San Francisco in September 2019. The event drew more than 800 people—the largest number of attendees to date. The 13th AACR disparities conference, chaired by Dr. Carpten, was held virtually Oct. 2-4, 2020.

“Minority scientists often find it harder to become well-recognized scientists due to structural barriers or because of the specific topics we investigate,” Dr. Fejerman said. “MICR shares my passion for cancer health disparities research and for helping minority investigators to develop their careers.”

A Comprehensive Look at COVID-19 and Cancer