Paying It Forward for Cancer Research

When I think about paying it forward, I am inspired by the spirit and grace of my friend, U.S. Army Colonel (Ret.) Gary Steele, who is one of the newest additions to the AACR Foundation Board of Trustees.

Gary has deeply instilled values of service, taught by his parents, that he has applied throughout his life, including as a cadet at West Point, where he was the first African American varsity football player, and throughout his 23 years of service in the U.S. Army. He also demonstrated these values when he decided to pay it forward by participating in clinical trials after he was diagnosed with cancer—first with prostate cancer in 2011 and several years later with multiple myeloma.

After a series of treatments failed to stop his prostate cancer, Gary was presented with the option to enroll in a clinical trial. Upon learning what the clinical trial entailed, he enrolled not only for himself, but because his decision to participate could potentially help others facing a similar diagnosis in the future—including his two sons. Gary knew this decision was much bigger than just him. He wanted to pay it forward. The clinical trial treatment has controlled Gary’s prostate cancer, and there has been no sign of the disease since 2015.

“Paying it forward,” simply put, means repaying a kindness you received with a good deed to someone else.

In 2017, paying it forward came full circle for Gary when he was diagnosed with multiple myeloma. A close family friend, who ultimately died from the disease, participated in a clinical trial for lenalidomide (Revlimid), which has become part of the standard of care for patients with multiple myeloma. This was not lost on Gary, whose multiple myeloma is being managed by the same therapeutic. Gary knows he is benefiting from the clinical trial his friend participated in, and he realizes what she did to pay it forward so he and others could have better outcomes.

Many of us are fortunate enough to have someone like Gary in our lives, someone we interact with daily or a stranger who pays for our coffee. They can be a cancer researcher or an AACR donor. Many of the stories featured in this issue of Leading Discoveries focus on others who are paying it forward. They know that we go further collectively than we do individually, that in cancer research especially, the whole is greater than the sum of its parts. I am inspired by these individuals, and I know that because of them, there is so much hope for the future.

Thank you for your continued support of our mission—and for being a champion of the AACR. 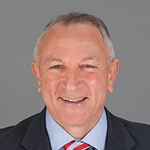 Why Support the AACR?

Leading by Inspiring Others