Cervical cancer could be nearly eliminated in low-poverty communities by 2030, by 2044 in high-poverty ones 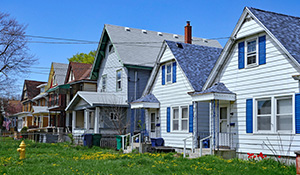 A predictive model developed by Jennifer Spencer, PhD, an assistant professor at the University of Texas at Austin, and her colleagues estimates that cervical cancer may be virtually eliminated in low-poverty communities in the U.S. by 2030, but not until 2044 in communities with high poverty rates. The results of the study were published in September 2021 in Cancer Epidemiology, Biomarkers & Prevention.

Approximately 14,000 cases of cervical cancer are diagnosed each year in the U.S., and 4,000 women die from their cancer. More than 90% of cervical cancers are caused by infection with certain types of human papillomavirus (HPV), a sexually transmitted infection that can also cause anal, penile, vaginal, vulvar, and oropharyngeal tumors. HPV vaccines have been available since 2006 and currently protect against seven of the 14 known HPV variations that increase cancer risk. Because the vaccine is over 90% effective at preventing HPV-related cancers, vaccination efforts in children and adolescents could lead to near elimination of cervical cancer. But, because most cervical cancers occur in patients older than 30, researchers turn to predictive models to understand the likely effects of widespread vaccination.

Using U.S. immunization data, Dr. Spencer and her colleagues ran simulations using the current vaccine initiation rate of approximately 70%. Their model predicted an estimated 21,604 excess cervical cancer cases in high-poverty areas over the next 50 years. The disparities are likely not due to differences in vaccination rates between low- and high-poverty areas, but rather due to differences in cervical cancer screening rates and a higher prevalence of cancer-causing HPV types not covered by the vaccine in high-poverty areas.

Novel peptide-drug conjugate may improve the efficacy of immunotherapy

A peptide-drug conjugate enhanced the efficacy of immune checkpoint inhibitors in preclinical cancer models, according to results presented at the AACR-NCI-EORTC Virtual International Conference on Molecular Targets and Cancer Therapeutics, held October 7-10. The drug, CBX-12, delivers exatecan, a cytotoxic agent, specifically to cells with an acidic environment, an almost universal feature of cancer cells.

Non-Hispanic Black patients with non-small cell lung cancer (NSCLC) who were treated with immunotherapy had a lower risk of death than their non-Hispanic white counterparts treated with immunotherapy, according to a study by epidemiologist Tomi Akinyemiju, PhD, of the Duke Cancer Institute and colleagues. The results were presented at the virtual 14th AACR Conference on the Science of Cancer Health Disparities in Racial/Ethnic Minorities and the Medically Underserved, held October 6-8. 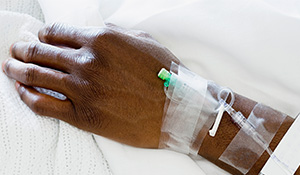 Black men are still more likely to die from lung cancer than white men. Reasons for this disparity include biological differences that affect disease progression and treatment response, as well as differential access to care. Issues such as high cost, lack of access to academic medical centers, and distrust of health care providers contribute to these gaps, according to Dr. Akinyemiju. The study addressed whether, among people who had access to immunotherapy, disparities between Black and white patients persisted or were mitigated. Using the 2016 National Cancer Database of 3,068 patients with advanced NSCLC who were treated with immunotherapy, and after adjusting the survival data for sociodemographic factors as well as tumor characteristics, the researchers found that non-Hispanic Black patients had a 15% lower risk of death than non-Hispanic white patients. The analysis also showed that non-Hispanic Black immunotherapy recipients living in counties in the lowest two quartiles of median income had an 18% lower risk of death than non-Hispanic white immunotherapy recipients at the same income level. Similarly, among immunotherapy-treated individuals with at least one comorbidity, Black patients experienced a 24% lower risk of death than white patients.

The study demonstrates that when barriers to care are removed for certain populations, patients are able to receive appropriate care, with better outcomes. 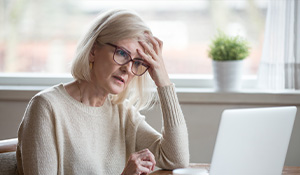 Women with HER2-negative breast cancer who had elevated markers of long-term stress had a lower likelihood of completing chemotherapy and a lower overall survival rate. These results were presented at the 14th AACR Conference on the Science of Cancer Health Disparities in Racial/Ethnic Minorities and the Medically Underserved, held online October 6-8.

Allostatic load is the “wear and tear” on the body caused by lifelong exposure to stressors—such as social isolation, poverty, and racism—many of which are common among racial and ethnic minorities. Elevated allostatic load—which includes measures such as cytokine levels, creatinine, and blood pressure—has been associated with various health problems, including increased body mass index, kidney disease, inflammation, and arthritis. Elevated allostatic load was used in the study as a marker of the effects of social and environmental stressors.

Samilia Obeng-Gyasi, MD, MPH, a surgical oncologist at the Ohio State University Comprehensive Cancer Center and her colleagues presented evidence that among the 348 women with lymph node-positive or high-risk, lymph node-negative, HER2-negative breast cancer from three genetic ancestry categories—African, European, and other—those with elevated allostatic load had a greater probability of stopping chemotherapy early and a higher risk of death. After adjusting for genetic ancestry, the researchers found that each one-unit increase in allostatic load score was associated with a 15% reduction in the likelihood of completing chemotherapy and a 14% increase in the risk of death. There was no observed association between genetic ancestry and survival or chemotherapy completion, suggesting that allostatic load may be better than genetic ancestry at predicting therapy completion and survival among breast cancer patients.

Blood cancer patients are highly vulnerable to COVID-19 infection, studies have shown. There is also accumulating evidence suggesting they may be among the least protected by COVID-19 vaccines. Medical oncologist David J. Chung, MD, PhD, of Memorial Sloan Kettering Cancer Center (MSK) and colleagues recently reported that patients with leukemia, lymphoma, and multiple myeloma all had fewer antibodies at one and three months after COVID-19 vaccination than people without cancer. Peak antibody response was stronger in women than men, and the Moderna vaccine elicited a stronger response than the Pfizer vaccine. The researchers also found that many patients had insufficient neutralizing capacity following vaccination despite positive antibody titers. These results were published October 8 in Blood Cancer Discovery. 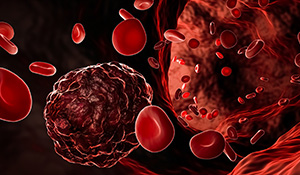 Another study by hematologic oncologist Roni Tamari, MD, also of MSK, and colleagues aimed to understand hematological malignancy patients’ responses to vaccination following treatment with cellular therapies, including allogeneic and autologous hematopoietic cell transplant and CAR T-cell therapy. The study, published in Blood Cancer Discovery October 14, found high response rates among recipients of cellular therapies, though the type of therapy and time since treatment impacted patients’ antibody levels and neutralizing capacity. Response to vaccination correlated with degree of immune recovery after transplantation, which can be tracked by simple blood tests, offering a clue to when these patients may regain the ability to respond to mRNA COVID-19 vaccines.

Another recent article published September 27 in Blood Cancer Discovery analyzed results from 18 studies on blood cancer patients’ responses to COVID-19 vaccination. The analysis showed that these patients have impaired antibody response to vaccination compared to healthy individuals, highlighting the urgent need to provide additional protection against COVID-19 to this vulnerable population.

The drug 4-demethyl-4-cholesteryloxycarbonylpenclomedine (DM-CHOC-PEN) improved survival for some adolescent and young adult (AYA) patients with cancers involving the central nervous system (CNS), according to the results of a phase II clinical trial. The data were presented at the AACR-NCI-EORTC Virtual International Conference on Molecular Targets and Cancer Therapeutics, held Ocober 7-10.

AYAs—defined as individuals from 15 to 39 years old—are diagnosed with around 200,000 cancer cases per year in the U.S. and face unique physical, social, and financial challenges compared with childhood or older cancer patients. With potentially decades of life remaining, long-term side effects, including toxicity to the kidneys, liver, and reproductive organs, are a significant issue for these patients. The development of well-tolerated therapeutics is particularly crucial to this community, said pharmacologist and oncologist Lee Roy Morgan, MD, PhD, of the Tulane University School of Medicine and CEO of DEKK-TEC and an investigator on the clinical trial. 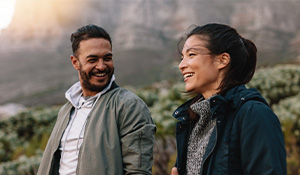 CNS-based tumors are particularly difficult to treat as many drugs cannot penetrate the blood-brain barrier to get to them, limiting current therapeutic options. DM-CHOC-PEN damages tumor DNA, readily crosses the blood-brain barrier, and is selectively taken up by a transporter often overexpressed in cancer cells, suggesting that the drug may have limited off-target toxicities.

The trial enrolled 19 AYA patients with various tumor types that either began in or metastasized to the CNS, and saw a complete response in two patients, a partial response in three patients and stable disease in one patient. Three patients with responsive disease are still undergoing treatment at 12, 59, and 72 months. DM-CHOC-PEN did not result in any severe (grade 3 or higher) toxicities, suggesting that the drug could be combined with currently available therapies.